As a little child, I grew up in a small rural community in El Salvador. I remembered that my parents took me to a home where there was a crowd of people. I was lifted above the crowd and what I saw was a small white coffin; it was open, and I could see that it was a boy laying in the coffin. He looked peaceful as if he was asleep. This event was the first time I saw a dead person and experienced how the family and community confronted the loss of a loved one.  Growing up in El Salvador during the civil war that started in the late 70s, the country was surrounded by an environment of fear, threats, and death. Under the pretense of “war on Communism”, there was a heightened support of US-backed Death Squads in Central America. People disappeared and were never found; thousands were killed. Many families like my own were forced to leave the country in search of safety as a result of death threats.  With these issues in mind, my works have taken an investigation of a personal and collective memory of violence, oppression, torture, death, disappearance, decay, loss, and displacement. These issues are constant denominators in my art.

The politics of “memory” are addressed in my works and embrace chockfull dangerous situations.  My works echo the brutality that victims endured as they were violated, dismembered and left on dumpsites by the death squads. Through my drawing and three-dimensional works, the human body and other familiar objects are transformed into frightening and disturbing evidence of violence.

I am interested in exploring new avenues in mix media for expressing my feelings and thoughts. This interest is reflected in my art practice. It involves the use of materials such as oils, acrylics, graphite, inks, print, photos, rust, fabric, silicone, plaster, found objects and making three-dimensional works. The use of different media allows for versatility, and it feeds to my urge for trying different things. For instance, rust is a medium that I like to use in my works because it is corrosive, and it degenerates. I find that it allows me to draw abstract portraits of disappearance, loss and death.

I completed ink drawings that depict "smoke". Various indigenous groups including our Mayan culture use smoke in rituals, and it is considered sacred. Other religions such as the Catholic Church burn incense during services as a symbolic gesture of prayer and offering; the burning, the smoke along with its smell is akin the presence of God. However, smoke has negative connotations. I see smoke as evidence of destruction, as a result of war assaults. I find it intriguing to see how the smoke begins as a thick mass and then it dissipates as it ascends to the open sky as if it is the material manifestation of the soul’s journey. With these works, I seek the opportunity to bring light to the human right violations and other forms of violence that still occur and are relevant in today’s world.
​

The Offering is a representation of three burning incense sticks; to express gratitude and humility for the gifts we have and respect for the lives of lost loved ones. I was inspired by various rituals Buddhist practitioners do and that I observed while visiting various cultural centers and Buddhist temples in the ancient town of Mudu, in Suzhou, China. 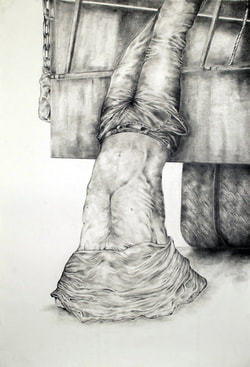 Dragged was inspired by one of the photographs at El Mozote massacre taken by Susan Meiselas in 1982, of a guerrilla dragged through the streets of Cuscatlancingo.
It depicts a male victim that is hanging lifeless from the back of a military truck. The death of this victim is a planned and ruthless political execution that serves as a public warning. 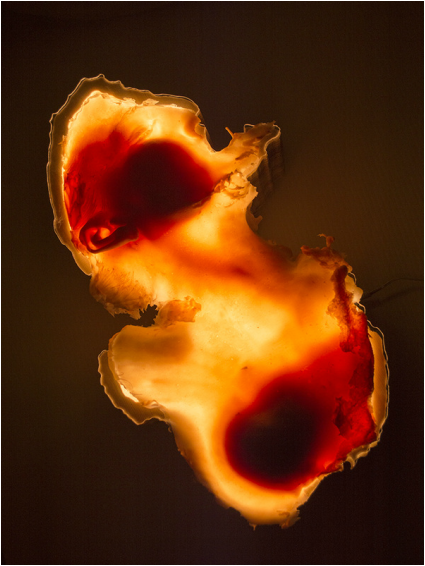 Agony sits over a layered wooden lightbox that has the shape of the figure. This piece extends from the right side of the female face to the right shoulder, and it has an irregular texture. The inclusion of the face makes the piece more real and grotesque. In contrast to the torso, the light effect on this piece makes it look like the flesh is on fire. It makes me think about the difficult moments of agony, pain, and suffering victims endured when tortured, dismembered and killed. 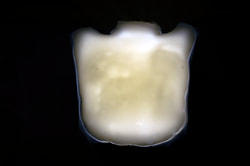 The torso is severed, translucent, without of colour, and without life. It sits over a layered wooden lightbox that has the shape of the work and serves as an extension of the torso. Once the lightbox is lighted, it brings a new life to the work. The light draws a glowing outline of the torso and creates shadows that resemble bruises. It is almost as if the victims’ soul is released through the light. 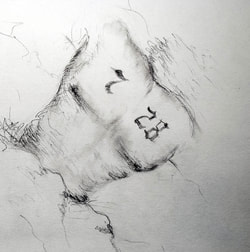 During the civil war, the military would communicate in codes. Words and numbers were used in code to command actions such as kill the enemy, the guerrillas. 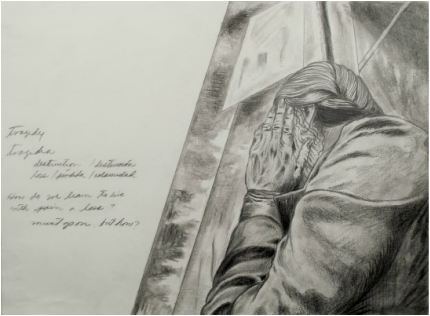 Tragedy, violence, and destruction are overwhelming experiences that can paralyze individuals and entire communities. The cycle of violence needs to stop.